A step by step tutorial to dockerize a Rails application and run it in Docker with PostgreSQL and Redis.
in category programming
tags: ruby - rails - docker - actioncable - postgresql - postgres - redis - chat - tutorial
I just released stup, a tool for easily keeping organized daily notes in the terminal. You can find it on GitHub here. 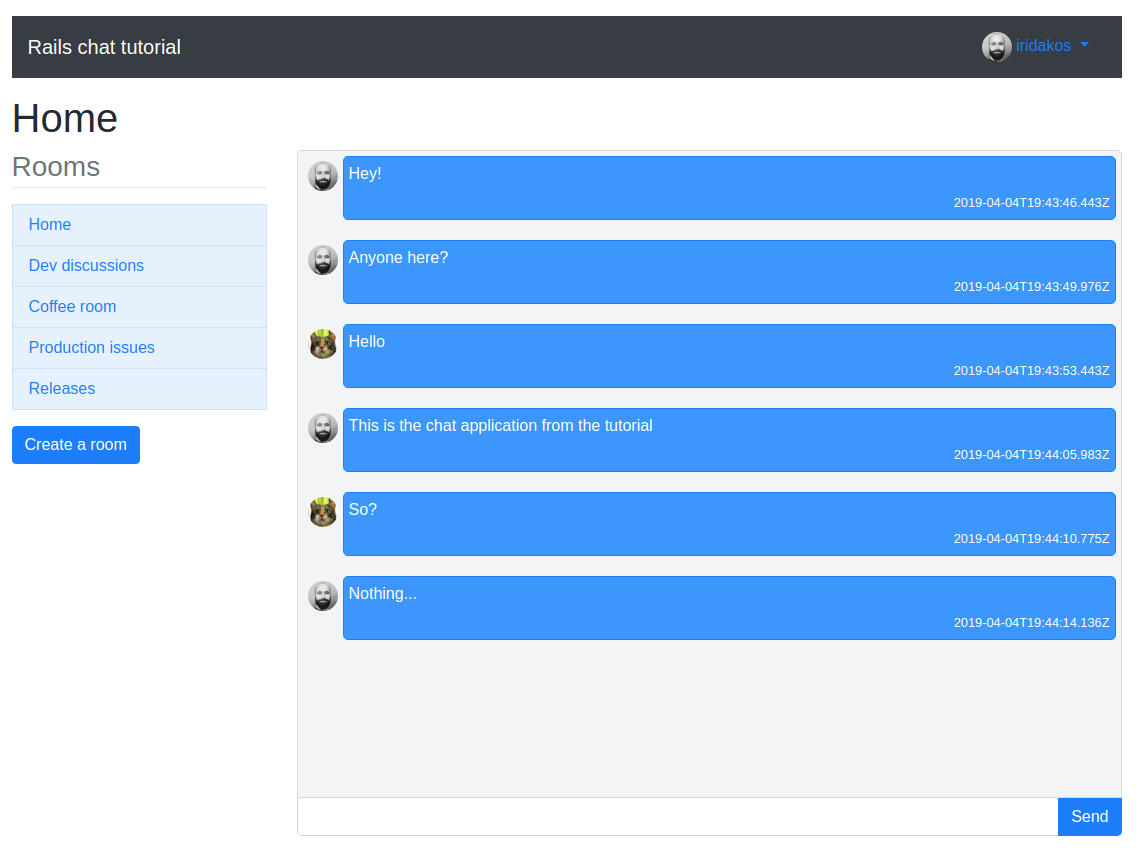 The first thing you need in order to follow this tutorial is to install Docker on your machine.

We are going to use the Docker Community Edition. Follow the installation instructions matching your system.

I’m on Ubuntu 18.04 LTS so following the instructions, I had to:

and I verified that I had the key with the proper fingerprint after executing:

The installation took place with these commands:

Upon installation, a new user group was created with the name docker. If you want to allow users to do docker stuff without using sudo, you have to do some extra configuration (read more here) but keep in mind that:

The docker group grants privileges equivalent to the root user. For details on how this impacts security in your system, see Docker Daemon Attack Surface. – Post-installation steps for Linux - Official Docker installation instructions

We are going to use sudo in this tutorial.

Navigate to your development directory on your machine and clone the sample Rails chat application with:

Configure the application to use PostgreSQL for the production environment

The application is configured to use the predefined sqlite database adapter. For the purpose of this tutorial we will change the adapter to postgresql and at the second part of the post we will create a container running the PostgreSQL database.

Open the file config/database.yml file and change the production configuration as described below:

Open the application’s Gemfile and add the following lines:

to install the adapter. The pg gem requires to have the package libpq-dev installed on the machine. We will satisfy this requirement when building the image.

We are going to build the image gradually in order to understand what’s going on with every command we use.

Whenever we want to create a new image in docker we use a file named Dockerfile. It is a text file with instructions to be followed sequentially to assemble an image.

Navigate to the Rails chat tutorial (from now I will call this application directory) directory and create the file.

and before continuing let’s try to build the image with just that empty file:

Of course we get an error, but take a look at the first line of the log:

When building an image, Docker creates a build context which is actually the files that will be available when the Dockerfile’s commands get executed.

The . (dot) part of the build command that we used tells Docker to try to build the image using the current directory for its build context.

Since we didn’t explicitly specified in the command which Dockerfile to use, Docker will use the one that is located in the root of the context.

Building the image from scratch is out of the context of this tutorial but if you want to familiarize your self with this aspect, read more here.

Docker provides official Ruby images and we are going to use the version that the Rails chat tutorial uses which is 2.6.2 as our parent image.

and run the build command again:

Execute the following command to see which images Docker has.

The hello-world is the Docker’s image that we used after installing Docker. The other image, the ruby one is the parent image of our image. Since the Dockerfile didn’t have any custom instructions other that just defining a parent image, the resulting image rails-chat-tutorial is actually the same as the parent image and has the same IMAGE ID, CREATED and SIZE properties. Time to change this.

The purpose of the image that we are building is to serve the Rails chat tutorial application. Eventually, to do so it’s pretty obvious that the image must contain the code of the application.

We will use the COPY command to copy the code inside the image.

Open the Dockerfile and append the following line:

This command will copy all files from inside the build context to the image.

Build the image again and execute the following command to confirm that we are good.

If you take a look at the ruby’s docker image, you will see that the last line is:

Since we don’t define something different in our image, the same command is being executed and that’s why the execution of the previous command brought us to Ruby’s irb console.

Let’s see what the /application directory of the container has.

Cool, the application directory has been copied. Moving on.

Before starting the server (puma in our case), we have to install the dependencies of the application. To do so, add the following line to the Dockerfile.

and rebuild the image.

We have an error because for the bundle command to succeed we must first change to the application’s root directory that does contain the Gemfile file.

Change the contents of the Dockerfile to the following:

and rebuild. Now the gems are being installed and we are ready to start the server.

In the production environment, assets have to be pre-compiled.

We will add this task in our ENTRYPOINT script (see below) because during asset compilation Rails initializes the application and if we executed the task upon building the image, the initialization would fail since some components (like database connection, configuration of services based on environment variables like cable.yml) are not available.

We must install a Javascript environment in the container though or else when the time comes and the task is executed, will get the following error:

We will install nodejs, add the following line:

Rebuild and you should be fine.

We want to start the application in the production environment. Rails can resolve this via the environment variable RAILS_ENV.

To set it in the image, add in Dockerfile:

The last instruction in the Dockerfile will be our ENTRYPOINT.

What’s left to do is to configure the entrypoint.sh script to do the following:

Create a file named entrypoint.sh in the root application directory and add:

This file has to be executable, so in your terminal:

Since there are no more modifications to be done in our Dockerfile, make sure its contents are the following:

We will optimize the Dockerfile since each RUN command creates a new image (read more here).

We will merge the RUN commands in one and move the ENV command just before it. The resulting Dockerfile is:

Running the application in the Docker environment

We are going to create a container for the PostgreSQL database.

Since the image doesn’t exist locally, Docker will fetch it from the Official Docker images and then it will create a container, binding the PostgreSQL default port 5432 to the same port of the host.

Notes: I suggest you read this documentation if you want to familiarize yourself with the options you have for customizing the container (volumes/database configuration etc).

To create the redis container, all we have to do is run the following command:

Again, since the image doesn’t exist locally, Docker will fetch it from the Official Docker images and then it will create a container, binding its 6376 to the same port of the host.

At this point, your docker running containers should look like this:

To create the container for the image that we created in this post passing the required environment variables, use:

Note: we bound the container’s 3000 port on the same port of the host.

Navigate to http://localhost:3000 and see what happens.

We don’t get very helpful information on the error since the application is running in production mode (at least this worked :P). Let’s connect to the container and check the logs:

Now you are connected to the container. Check the /application/production.log file. Somewhere among all these lines you will see the following:

We set up the database server but we didn’t create/migrate the database. Since we are already connected to the container we will execute the required rake tasks.

Reload the page and voilà

In the next tutorial we are going to: 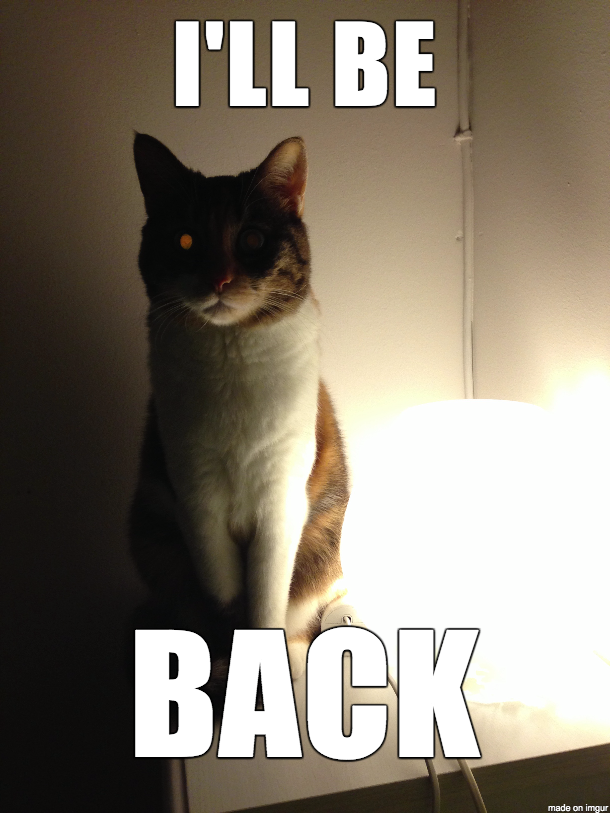 Code and comments
You can find the code of this tutorial on https://github.com/iridakos/rails-chat-tutorial on branch docker. For feedback, comments, typos etc. please open an issue in the repository. Thanks for visiting!
Table of contents
previous post Creating a chat application from scratch using Rails and WebSockets
next post How to alias and navigate to directories with autocomplete in Linux