I recently worked on creating a bash completion script for registering directory aliases and navigating to them with autocomplete in Bash and I found the feature really interesting.

In this post I will familiarize you with the process of adding bash completion to your scripts.

What is bash completion?

Bash completion is a functionality through which bash helps users type their commands faster and easier. It accomplishes that by presenting possible options when users press the tab key while typing a command.

The completion script is code that uses the builtin bash command complete to define which completion suggestions can be displayed for a given executable. The nature of the completion options vary from simple static to highly sophisticated.

It is good to provide such a functionality to users:

Here’s what we are going to do in this tutorial.

We will first create a dummy executable script called dothis. All it does is execute the command which resides on the number, that was passed as an argument, in user’s history. For example, the following command will simply execute the ls -a command given that it exists in history with number 235:

Then we will create a bash completion script that will display commands along with their number from user’s history and we will “bind” it to the dothis executable. 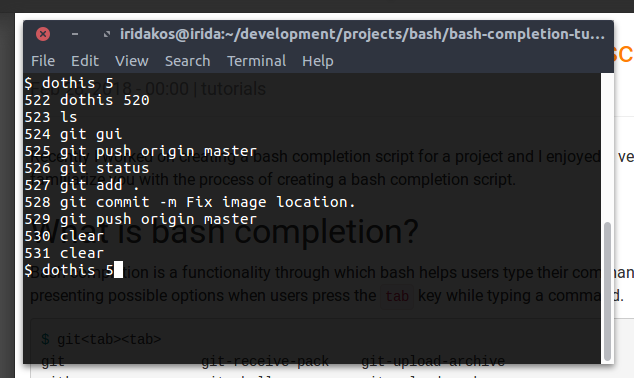 You can see a gif demonstrating the functionality at this tutorial’s code repository on GitHub.

Create a file named dothis in your working directory and add the following code:

Make the script executable with:

We are going to execute this script many times in this tutorial so I suggest you place it in a folder that is included in your path so that we can access it from anywhere with just typing dothis.

I installed it in my home bin folder using:

You can do the same given that you have a ~/bin folder and that it is included in your PATH variable.

Try to see if it’s working:

You should see this.

Create a file named dothis-completion.bash. From now on we will be referring to this file with the term completion script.

Once we add some code to it, we will source it to allow the completion to take effect. We must source this file every single time we change something in it.

We will discuss our options for registering this script whenever a bash shell opens later on.

Suppose that the dothis program supported a list of commands, for example:

Add this to the completion script.

What did we specify with the complete command above:

Now try pressing tab twice in the command line as shown below:

Try again after typing the n:

Magic! The completion options are automatically filtered to match only those starting with n.

Note: The options are not displayed in the order that we defined them in the word list, they are automatically sorted.

There are a lot of other options to be used instead of the -W that we used in this section. Most of them produce completions in a fixed manner, meaning that we don’t intervene dynamically to filter their output.

For example, if we wanted to have directory names as completion words for the dothis program, we would change the complete command to the following:

Pressing tab after the dothis program, we would get a list of the directories in the current directory from which we execute the script:

Find the complete list of the available flags here.

We will be producing the completions of the dothis executable with the following logic:

Let’s start by defining a function that will execute each time user requests completion on a dothis command. Change the completion script to this:

Now source the script and go for completion:

Perfect. We produce the same completions as in the previous section with the word list. Or not? Try this:

As you can see, even though we type nev and then we request for completion, the available options are always the same and nothing gets completed automatically. Why is this happening?

Enter compgen: a builtin command that generates completions supporting most of the options of the complete command (ex. -W for word list, -d for directories) and filtering them based on what already has been typed by the user.

Don’t worry if you feel confused, everything will become clear later on.

Type the following in the console to better understand what compgen does:

So now we can use it but we need to find a way to know what has been typed after the dothis command. We already have the way. The bash completion facilities provide bash variables related to the completion taking place. Here are the more important ones:

To access the word just after the dothis word, we can use the value of COMP_WORDS[1]

Source and there you are:

Now, instead of the now, tomorrow, never words, we would like to see actual numbers from the command history.

The fc -l command followed by a negative number -n displays the last n commands. So, we will use:

which lists the last 50 executed commands along with their numbers. The only manipulation we need to do is replace tabs with spaces in order to be displayed properly from the completion mechanism. sed to the rescue.

Change the completion script as follows:

Source and test in the console:

We do have a problem though. Try typing a number as you see it in your completion list and the press the

This is happening because in our completion script, we used the ${COMP_WORDS[1]} to always check the first typed word after the dothis command (the number 623 in the above snippet). Hence the completion continues suggesting the same completion again and again while pressing the tab key.

To fix this, we will not allow any kind of completion to take place if at least one argument has already been typed. We will add a condition in our function checking the size of the aforementioned COMP_WORDS array.

There is another thing we don’t like though. We do want to display the numbers along with the corresponding commands to help users decide which one is the desired but when there is only one completion suggestion and gets automatically picked by the completion mechanism, we shouldn’t append the command literal too.

In other words, our dothis executable accepts only a number and we haven’t added any functionality checking or expecting other arguments. When our completion function gives only one result, we should trim the command literal and respond only with the command number.

To accomplish this, we will keep the response of the compgen command in an array variable and if its size is 1 we will trim the one and only element to keep just the number. Otherwise, we’ll let the array as is.

Change the completion script to this:

If you want to enable the completion just for you on your machine, all you have to do is add a line in your .bashrc file sourcing the script:

If you want to enable the completion for all users, you can just copy the script under /etc/bash_completion.d/ and it will automatically be loaded by Bash.

Some extra steps for better results :)

Displaying each entry in a new line

Well, in the bash completion script I was working on, I too had to present suggestions consisting of two parts. I wanted to display the first part with the default color and the second part with a gray color to point out that it was just help text. In this tutorial’s example, it would be nice to present the numbers in the default color but the command literal in another one, less fancy.

Unfortunately, this is not possible at least for the time being because the completions are displayed as plain text and color directives are not processed (for example: \e[34mBlue).

What we can do though to improve user experience (or not :D) is to display each entry in a new line. This solution is not that obvious since again we can’t just append a new line character in each COMPREPLY entry. We will follow a rather hackish way and pad suggestion literals to such a width that fills the terminal’s width.

Enter printf. If you want to display each suggestion on each own line, change the completion script to the following:

In our case, we hard-coded to display the last 50 commands for completion. This is not a good practice. We should first respect what each user might prefer and if he/she hasn’t made any preference then we should default to 50.

To accomplish that we will check if an environment variable DOTHIS_COMPLETION_COMMANDS_NUMBER has been set.

You can find the code of this tutorial on GitHub.

For feedback, comments, typos etc. please open an issue in the repository.

Let me introduce you to my debugger. 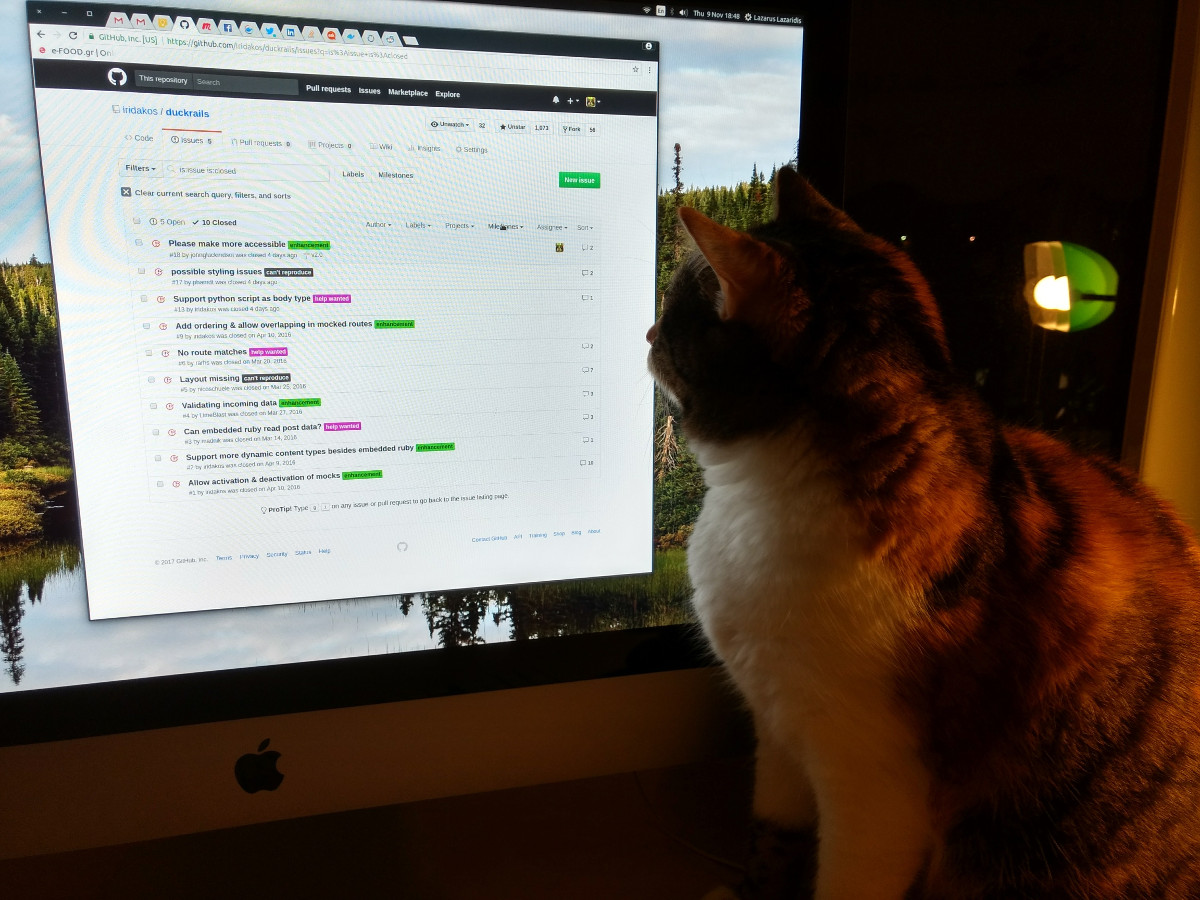