Creating a simple ToDo application with Ruby on Rails - Part 4

Last part of the tutorial creating a simple ToDo application with Ruby on Rails.
in category tutorials
tags: ruby - rails - tutorial - todo - web application - mvc
I just released stup, a tool for easily keeping organized daily notes in the terminal. You can find it on GitHub here.

In the previous three posts we created a simple ToDo application with Ruby on Rails. In this last part we are going to deploy the application to OpenShift.

You can find the complete code of the tutorial here.

OpenShift is a cloud application platform (by Red Hat).

Few months ago, when I was discovering Ruby & Ruby on Rails I started developing an application in order to practice.

When I completed the first version I wanted to have it online for demonstration purposes and thus I started exploring my options. I decided really fast since I had a requirement that only OpenShift (at least at that time) could fulfill: local storage. I wanted to allow users to upload files without using any other online storage service. I needed to have the files on the same server.

Now, after 4 months, I’m completely satisfied with my decision and not just because of the local storage:

We are going to use git so if you don’t have it yet, install it now.

We will install the client tools (rhc). From the command line: 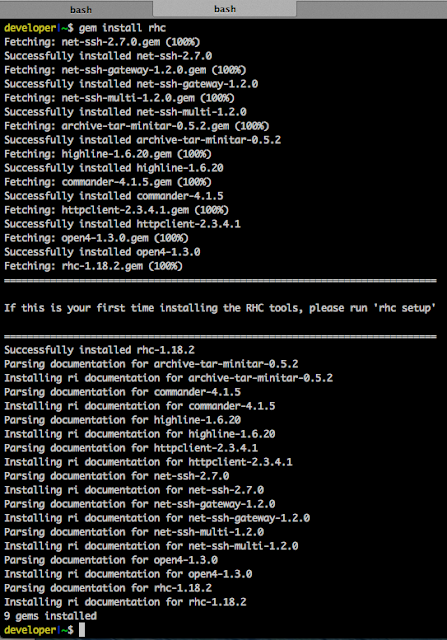 and we are going to configure them with:

Choose to generate the token so that you don’t have to login each time you interact with your remote machine (from now on we will call this gear):

If you don’t have any SSH keys, OpenShift will automatically generate one for you (nice) and will ask you if you want it to upload it to the server so that you can access your code. Say yes.

Next, you will be asked to create a domain under which your applications will be grouped. Choose one (this is going to be used in your applications public url ex: todo-yourdomain.rhcloud.com). I chose arubystory:

That’s all. We configured the tools to use our account.

Time to “create” the ToDo application on OpenShift.

When we will fire the command, the tool is going to create the application on OpenShift and then it will try to clone the remote repo to a local folder with the same name as the application. We want to skip the last part because we already have this folder. To do so, we are going to execute the command from the directory containing our project’s directory. 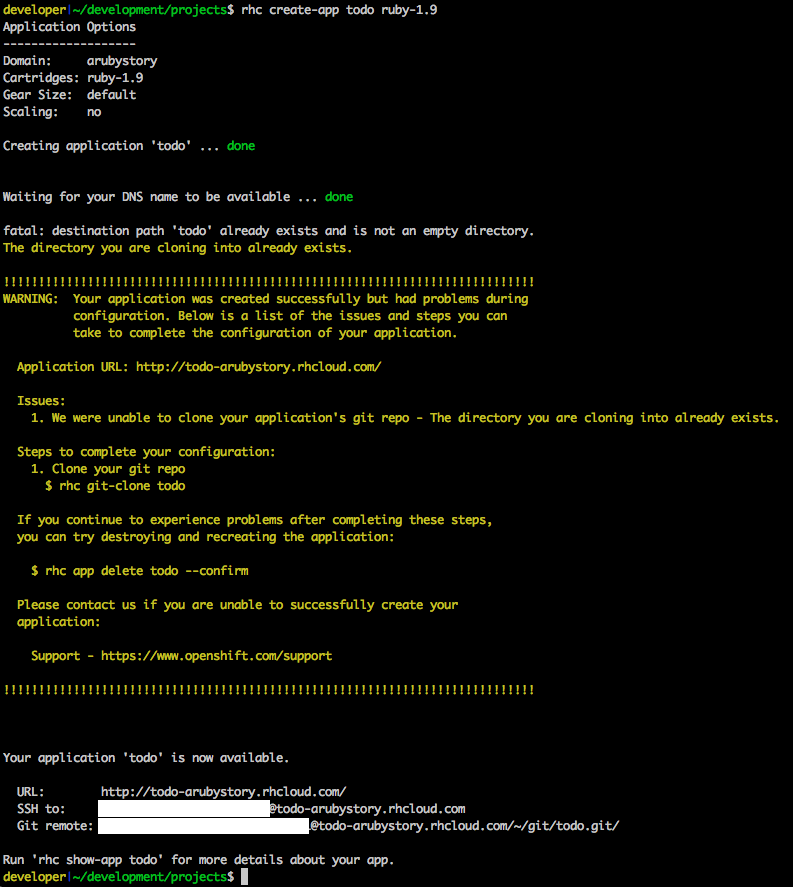 We will add the remote git using the information provided with the following command:

Copy the value of the Git URL because you are going to use it in the following command:

Let’s commit. From the command line:

And let’s merge the remote:

As you can see, we have a conflict in config.ru. Edit this file and change it to the following (we overwrite the remote changes with ours):

Commit the changes, from the command line:

And time to deploy the application! With one line. This:

Visit the application url from your browser: http://todo-yourdomainhere.rhcloud.com

Don’t worry, we expected this. We haven’t setup the database for production. We will do this “sshing” to our gear. From the command line:

Yes, this is your gear. Let’s setup the database. From the gears command line:

and from your command line (not the gear’s one) restart the application:

Give it some time and refresh your browser. There it is! 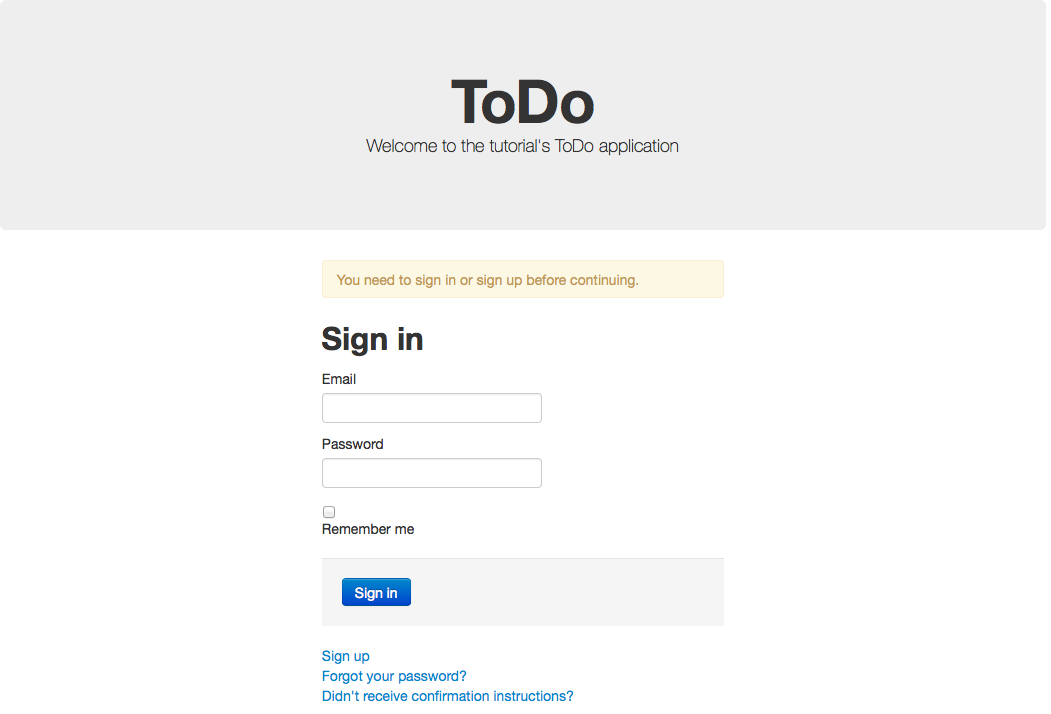 Now, if you try to sign up you’ll see the error message again.

This is expected too. Our email configuration was only for the development environment (we had it only in development.rb file and also we were using the mailcatcher for simulating an smtp server).

We obviously want emails to be really sent to our users in production so we must go with a real configuration. I will show you how to configure mailer to use a gmail account. Add the following in config/environments/production.rb

Let’s deploy the fix. From the command line:

After the gear starts, refreshing the browser you’ll see the error message again. This time the problem is once again the database. But why? Take a look at your db/database.yml 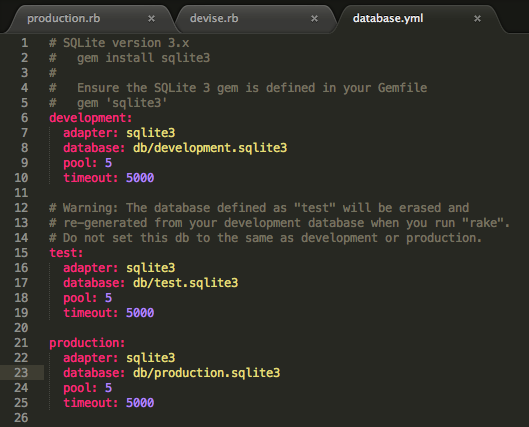 As you can see, the database is saved under db/production.sqlite3. This file doesn’t exist in our repo. We are going to set this value pointing to a file that is not in the repo but to another directory of the gear! That directory already exists and OpenShift has taken care so that we can see what it is with an env variable: OPENSHIFT_DATA_DIR . Change the production database line to this:

Ssh to the gear again and re-setup the database:

From the gear’s command prompt:

Let’s see that the database was created (gear’s command line).

You should see the production.sqlite3 file there.

That’s it. We’re done! The application is successfully deployed to OpenShift.