Creating a simple ToDo application with Ruby on Rails - Part 3

This is the third part of the tutorial. In this part, we are going to use Devise & CanCan in order to add authentication and authorization features to the application.

In order to continue, you must complete the previous two parts if you haven’t done this already:

You can find the complete code of the tutorial here.

Our users will register to the application using their email address and they will receive a confirmation email in order to activate their account.

Before introducing Devise, you’ll get to know MailCatcher which is an awesome gem for simulating a real smtp server. We will configure the application to use it when in development mode.

Install the gem from the command line:

and start the smtp server:

As you can see from the output, we will be sending our mail through:

and we will browse the sent emails via the web interface at:

Visit the last one, you should be seeing something like this:

Now open the development.rb file which is located under config/environments and add the following lines:

The first line defines which host is going to be used while converting the relative paths in our emails to absolute ones.

The second ones defined the protocol to be used and the last one sets the settings of the smtp server.

Devise is a gem that will provide us with almost anything about authentication.

Open your Gemfile with your text editor and add the devise gem:

and then, from the command line execute the bundle installer:

In order to have the gem’s initialization stuff automatically generated for us, execute from the command line again:

This command will create two files:

The first one configures the devise and second one has localized messages used by the gem.
Open the first one and comment out the line since we won’t be using this option:

Now, we are going to instruct devise to generate the model that will be used for our users:

With this command, we created our User model & the migration that will create the table for the model and we also added automatically the appropriate routes for registration/sign in/confirmation etc.

Before applying the migration, we will create another one because we want to enable the confirmable option so that our users confirm their account before start doing anything with the application.

To do so, we will generate a custom migration:

Now open the generated file (xxxx_add_confirmable_to_users.rb) with your text editor and change its contents to the following:

This migration will add columns to our users table to keep information about confirmations.
We are ready to migrate, from the command line: 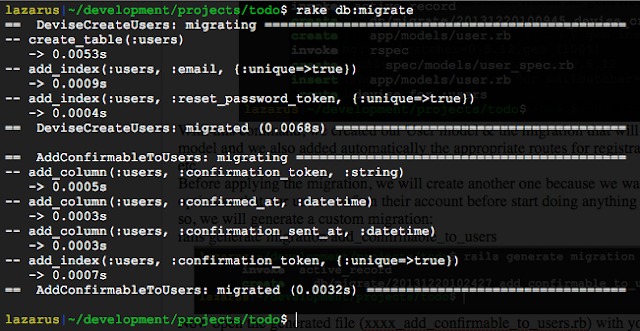 We updated our users table but we need to update the model too. Open user.rb which is located under app/models/ and change it to this:

We just added the :confirmable option.

Let’s check what is going on with our routes, from the command line: 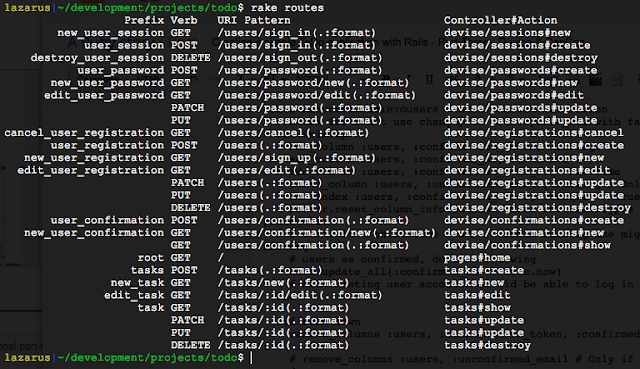 Wow, way too many new routes. Time to start the server: 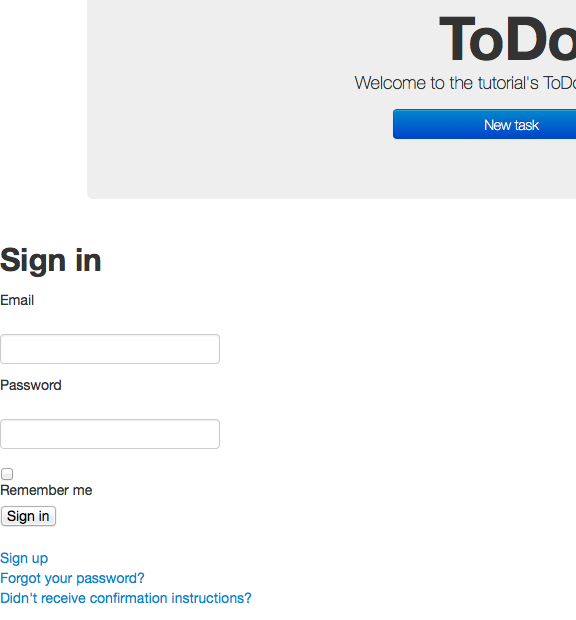 Where did this view come from?

Well, devise has some default views that we use by default. But what if we want to use our own? This page doesn’t look good…

Thankfully, devise gives us the option to generate the default views inside our application’s views folder so that we can make changes on them.

By default, the generated views are of erb type and since we are using haml we will follow one more step. 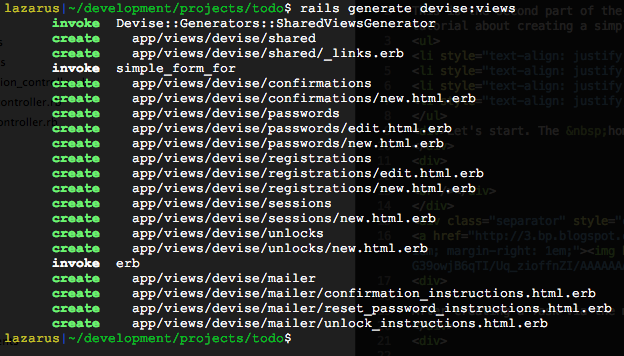 At this point, it would be a good exercise for you to convert all generated views to haml (don’t forget to change the file extension to .html.haml) but there is another way.

I got a bunch of warnings from the last command but the conversion was successful.

Ok, now we can edit these files and make the views look what we want.

But instead of “centralizing” all devise’s forms file by file we have also another option. We can create another layout (besides our application’s default) and configure the application to use it if the executed action belongs to a devise controller.

Create a file with name devise.html.haml into app/views/layouts and add the following:

and add the following to the application_controller.rb: 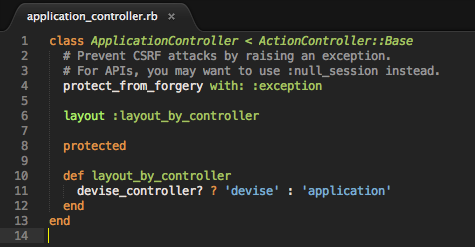 Refresh your browser, much better: 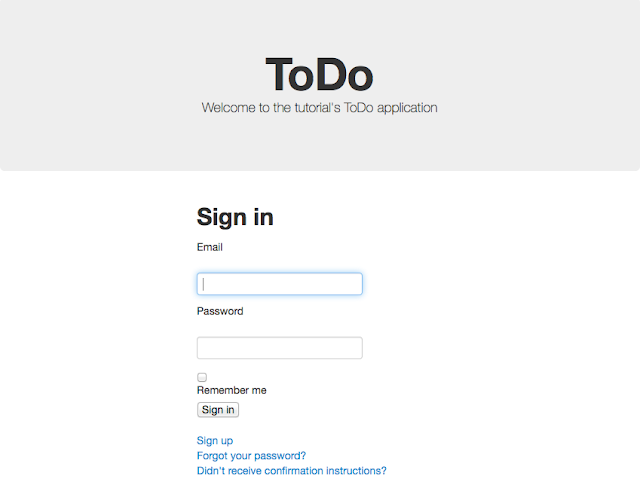 Let’s bootstrap that sign in button, edit the new.html.haml file located under app/views/devise/sessions and add the bootstrap class to the button: 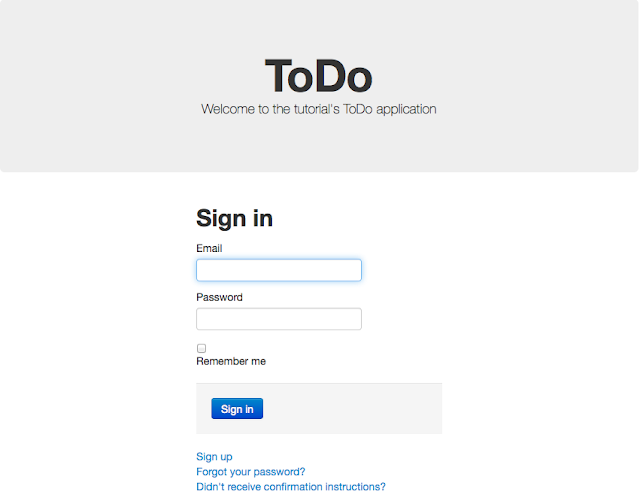 Now, I want you to visit the root path of the application, http://localhost:3000

Hmm, where is the authentication? We are going to add a filter in our application_controller.rb so that all actions require an authenticated user. Edit the file and add this line: 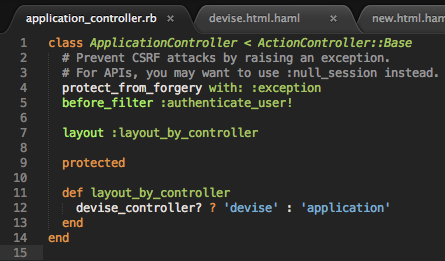 Refresh, you should be automatically redirected to the sign in page.

Let’s create a user. Follow the sign up link (as an exercise, on each new devise view missing the bootstrap stuff, find the file and make the appropriate changes): 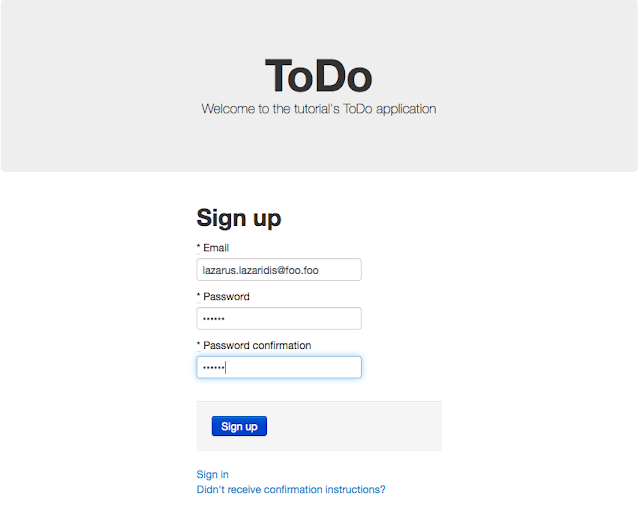 Press the sign up button and open a new tab to your browser to see the MailCatcher stuff (http://localhost:1080):

So far so good, but something wasn’t quite nice. We should be seeing some default devise generated messages for the actions we executed (like “Successfully registered” etc) but nothing was displayed.

Devise uses flash messages and currently we have done nothing about showing them.

We will create a simple partial under a new folder located at app/views/shared named _flash.html.haml with the following contents:

Trying to sign in with invalid credentials should show you an error message now: 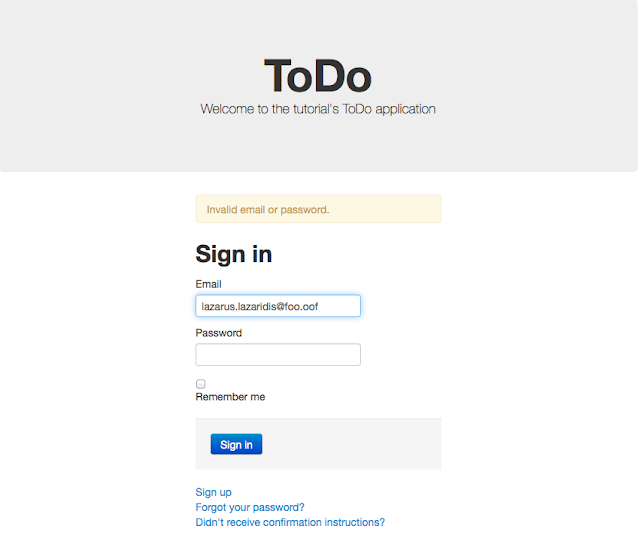 Nice. Let’s add some user related stuff to our application layout so that when logged in a user can see his username and a logout link. Edit application.html.haml and add the following inside the hero-unit. We added the current user’s email (using the helper method current_user provided by devise) and a logout link pointing to the destroy session path from our routes.

Now, after a user logs in, you should see something like the following:

Ok, we have added user authentication. Now before accessing the home page and all of its task related actions, an authenticated user is required. But, which task should a user be able to view/edit/destroy?

Before messing with CanCan, we should think a little about our models.

We have users and tasks. We want each user to manage his/her own tasks without being able to do anything to tasks that belong to another user.

So, we need to add a new attribute to our Task model that will keep track of the User it belongs to. We will do this firstly by creating a migration to add a user_id column to the users table:

Open the generated file and confirm that rails understood exactly what we wanted to do:

Now we must tell to both our models about their association. 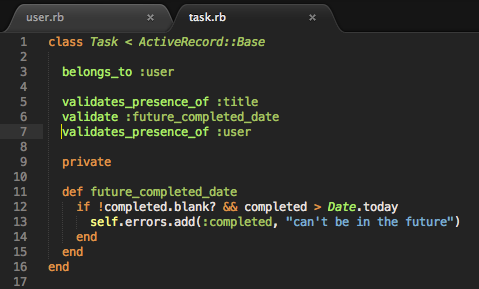 Rails understands in both cases which model is being associated by the value of the symbol.

Apply the migration to the database:

CanCan o’Clock. We will use CanCan in order to protect a user’s tasks from being accessed by another user.

Add the gem to your Gemfile:

and bundle from the command line:

Open the generated file with your text editor and replace its contents with the following:

Here we define that a user can execute any kind of action on a Task only if the task’s user_id attribute matches the current user’s id.

Time to authorize our actions. There is a shortcut for this but we will to do it the tedious way. Open the tasks controller and review the actions:

We will apply the limitations above using the CanCan’s authorize! action. This method accepts two parameters, the action (symbol) that will be executed and the object on which it will be executed.

Change the controller’s actions as below:

All actions in the authorized! calls could be replaced by the :manage symbol but I wanted to show you your options in case you had defined different abilities per action.

Also notice that in the create action we added the line

This line will “fill” the user_id of each newly created task with current user’s id.

After all these changes, if a user tries to edit/update a task that belongs to another user, an AccessDenied error is going to be raised.

Note: the task_params method we defined in the previous part of the tutorial protects our task model from being assigned with a user_id from the parameters.

In the home page we show all the tasks. ALL the tasks.

This isn’t right. So there is a last thing to do. Filter the tasks. Thankfully, CanCan provides us with a very nice way to do this. A model scope that uses the ability.rb permissions!

Open the pages_controller.rb and change it as below:

And now we are fine. I suggest you register more users and start messing with the user_id attributes of your tasks to see the authorization being applied.

This is the last part of the tutorial that we actually implement stuff for the ToDo application.

There is going to be a final part in which I am going to help you deploy the application to OpenShift!